The Malaysian Flag comprises 14 alternating red and white stripes along the fly and a blue canton bearing a yellow crescent and a 14-point star.

We know the star as the Bintang Persekutuan (Federal Star).

In Malay, we know The Malaysian Flag as “Jalur Gemilang,” the Stripes of Glory.

Name: Jalur Gemilang (‘Stripes of Glory’)
Use: National Flag
Proportion: 1:2
Adopted on: May 26, 1950, original 11-point star and 11 stripes
Adopted on: September 16, 1963, with current 14-point star and 14 alternating stripes.
Design: Fourteen horizontal alternating red and white stripes.; a yellow crescent and a fourteen-point star on a blue field in the canton.
Designed by: Mohamed Hamzah

Meaning of the Malaysian Flag

There are 14 stripes, each of equal width, designed to represent the federation of the member states and federal territories.

The Malaysian Flag also features a star with 14 points.

The design represents the unity between the federal territories and the 13 member states.

Positioned beside the star is a crescent moon, which represents the nation’s official religion of Islam.

Colors of the Malaysian Flag

There is a blue canton that represents the unity of the Malaysian people.

The yellow crescent moon and yellow star are placed in the canton.

The star and crescent in yellow is the royal color of the Malay rulers.

The similarity of the Malaysian Flag to the US Flag

While many remarked that the Malaysian Flag bears a close resemblance to the American Flag, it is accidental.

The Malaysian Flag was modeled on the British East India Company flag.

However, its stripes and crescent, and moon shapes reflect specific aspects of Malaysian culture and society.

History of the Flag of Malaya

The Flag was first raised on September 16, 1963, originated from the Flag of the Federation of Malaya.

Before creating the national Flag, each state in Malaya had its own Flag, many of which are unchanged in design to this day.

The Flag’s design is based on two existing flags, the Majapahit and the Johor flag.

The designer of the Malayan Flag

He submitted two designs that he completed within two weeks.

The first design was a green flag with a blue kris in the middle, surrounded by 15 white stars.

Among the three finalists, the second design was like the current Flag but with a five-pointed star.

The design borrowed significant elements from the Flag of the East India Company, notably the red and white stripes.

The competition attracted 373 entries, and the public made voting via post.

Malayan senior statesman Dato’ Onn Jaafar met with Mohamed Hamzah after winning the competition and suggested that the star be changed to an 11-pointed one to represent all the Malayan states. Modifications of the Malaysian Flag

Following the formation of Malaysia on September 16, 1963, we changed the design of the Malayan Flag to reflect and honor the new states in the federation.

They added three additional stripes to the existing Flag.

They gave the star 14 points to reflect the federation of the original 11 states in Malaya with Sabah, Sarawak, and Singapore.

The design remained the same even after Singapore’s expulsion from the federation two years later.

When Kuala Lumpur was designated a Federal Territory on February 1, 1974, they appropriated the additional stripe and the point in the star to represent this recent addition to the federation.

Eventually, with two other federal territories, Labuan in 1984 and Putrajaya in 2001, the fourteenth stripe and point in the star came to be associated with the federal government.

In 1997, when Malaysians were invited to name the Flag, Prime Minister Mahathir Mohamad picked Jalur Gemilang to project the country’s onward drive towards continuous growth and success. The Malaysian flag was adopted on: September 16, 1963, with a current 14-point star and 14 alternating stripes.

Mark of respect for the Malaysian Flag

The government encouraged Malaysians to fly the Jalur Gemilang at their homes, office buildings, shops, and corporate premises during the National Day celebrations.

If the Flag is put in a group of flags with state and private company flags, the Malaysian flag must be raised between two flags and its pole placed higher than the rest.

In 1997, after the Malaysian Flag was given the name Jalur Gemilang, they updated the flag anthem to reflect this change, introducing a new flag anthem.

We perform the Malaysian flag anthem on Hari Merdeka, the nation’s independence day, on August 31 every year. Malaysian Flag raised high and fluttering in the wind.

The mighty Flag of mine
Red, White, Yellow, and Blue are the colors
Flying high up in the skies
The legacy of all of us Malaysians
O my Flag, The Flag of Malaysia
I will defend it with all of my might
The Symbol of a unified nation
Under the patronage of His Royal Highness
Fly high o my Flag
I will raise it all the time
O shine up, my beloved nation
To you, I swear my full allegiance
The Flag of Malaysia, our Flag
The pride of all of us
Fly, fly high up in the skies
Long live our beloved Flag! 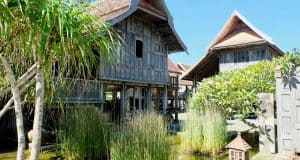 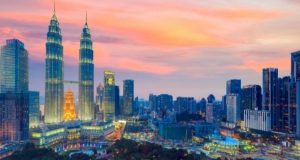