The Strait of Johor is an imaginary line as an international boundary separating Malaysia from Singapore.

The two countries are connected by the Johor–Singapore Causeway and the Tuas Second Link.

The states of Sabah and Sarawak are in Borneo and border Indonesia Borneo and the tiny sultanate of Brunei.

Because of the distance, the weather patterns differ significantly in each area.

In the major cities, the weather is always hot and humid.

Malaysia has an average humidity of around 80% – about the climate of Florida.

Unlike Florida, Malaysia is relatively safe from direct tropical cyclone hits due to its geographical position.

The temperature across Malaysia fluctuates between 77 F and 95 F during the year.

The Titiwangsa Range, also known as “Banjaran Besar” (Big Range) by locals, is the chain of mountains that forms the backbone of the Malay Peninsula. The Titiwangsa Range protects West Peninsular Malaysia from turbulent weather during the monsoon season from mid-October until the end of March.

Heavy showers pour for an hour or so during the monsoon, with the rest of the day remaining bright.

Travel Tip: Rain patterns are consistent, so if it rains on a Monday at 2 p.m., it will rain around the same time, give or take an hour, for the next five days, before the pattern changes again.

You can plan your outdoor activities accordingly.

The rain in the afternoon allows you to get out early when it’s guaranteed to be dry. From May to October is officially the southwest monsoon, where it can rain for weeks.

All of the resorts and ocean-based operators on the East Coast close during this rough, turbulent rainy season.

As it is cold and wet and prone to flooding, few expats live on this side of Peninsular Malaysia.

The June–September high season is the best time to visit the east coast. Rural areas in Kelantan are beautiful to visit.

Sabah has two seasons: the wet season from September to January and the dry season from February to August.

Generally, the weather patterns and rainfall levels are unpredictable, and there is little distinction between seasons.

Sabah has stable temperatures throughout the year and only varies by about two degrees.

Rain falls evenly throughout the year between February and April. Sarawak’s temperatures average between 73 F and 90 F, depending on location and time of year.

The difference between the wet and dry seasons is more distinct in Sarawak.

Visitors looking to visit the indigenous tribes in the interiors may want to travel during the dryer months between June and August.

An Iban Longhouse in Sarawak.

Places With Cooler Climate in Malaysia

If you visit Malaysia, the country isn’t all about heat and humidity.

Peninsular Malaysia’s most famous cool hills for weekends away are

In the state of Sarawak, popular places to visit are However, the climate is often quite humid due to its proximity to water.

Despite the high humidity, the weather is never too hot.

Average temperatures range from 20°C to 30°C on average throughout the year.

In Malaysia, The four seasons of the climatic year are

There are two-period inter monsoonal period

The Climate in Malaysia is hot and humid, with April, May, and June being the hottest months of the year.

If you want to know the current climate in Malaysia. 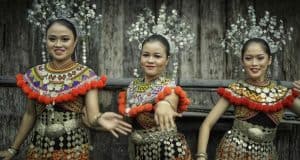