With an extensive list of tourism attractions, domestic and international travellers have the liberty to choose the ones to include in their travel itinerary.

Top of the list of places you can learn about traditions, cultural values and worship at Selangor Buddhist Temples.

Commonly visited by travellers either to perform acts of devotion or merely to attain spiritual inspiration.

The temples were the best-visited places of worship and became lively during the Chinese New Year celebration.

In 2021, the celebrations may portray a significant difference with SOPs in place.

It is permitted to perform prayers for 30-minutes at the temple within a 10-km radius with a limit of 30 persons at a time on three dates; February 11th, 12th and 19th.

If you’re in Kuala Lumpur next, you can check out these interesting Buddhist temples.

Here is a list of The Top 5 Selangor Buddhist Temples for your next travel to the State. Dedicated to Lord Buddha, this two-level temple is unique as its upper level is an artificial cave with overhanging stalactites.

The main prayer hall is on the ground floor, connected to the top floor by a pair of grand staircases, while the upper levels were built to imitate the mountains’ view. For more than a decade, the temple’s highlight is the display of giant light instalments for the annual CNY Lantern and Floral Festival.

The temple is a highlight in Selangor’s calendar of events.

Admission to the festival is free, and the event attracts nearly a million visitors yearly.

A visit to the venue should not be just a once-a-year affair, as the temple itself is a nice year-long attraction in the quaint district of Kuala Langat.

Take a stroll down Lumbini Garden or head over to 33 Avalokitesvara Bodhisattva within the temple’s compound to appreciate the beauty of colourful flowers and intricate sculptures. Built-in 1892, Kuan Yin Temple is one of the oldest Chinese Temples in Royal Klang Town.

Fujian Chinese who fled their hometown settled in Klang to fill labour shortages in tin mines, plantations, and railway constructions back in the old days.

They brought along their Gods and Goddesses with them to build a temple in their new settlement.

It nearly faced demolition before the Sultan of Selangor declared it as the State’s heritage site.

Located at the bustling Jalan Raya Barat, it is now a place of worship for the Chinese community in the Royal Town.

Immerse yourself in art and heritage galore the moment you go through its majestic entrance.

The best has yet to come; get in deeper, and you will definitely be amazed by the symphony of faith and the arts.

Come and see it for yourself! Nan Tian Temple (Nine Emperor Gods Temple) is a Chinese temple located in the middle of the Sekinchan paddy field.

Nan Tian Temple, which was established in 1984 and extended in 2004 into today’s scale, became the landmark of Site A, Sekinchan.

Every 1st to 9th of the 9th month of the Lunar Calendar, worshippers celebrate Nine Emperor Gods’ birthday for a period of ten days.

In Sekinchan, both farming and fishing industries are highly dependent on the weather. Hence it becomes the most important religious event of the town. Located at the peak of a hill, the temple has a statue of Guan Yin Bodhisattva offers mesmerizing views from the top overlooking the nearby village.

Historical architecture in Kuala Kubu Bharu Town includes traditional shophouses and old fire and railway stations spanning from the 1920s to the 1980s.

The temple, which survived a massive flood, was refurbished in the 1980s.

The gravesite of Sir Cecil Ranking, located within MRSM Kuala Kubu Bharu’s compound, serves as a monument to the 1883 flood. You haven’t seen it all until you’ve visited these stunning Buddhist temples. 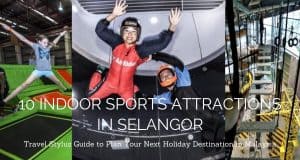