There are other islands near Penang and the mainland for visitors seeking quiet beaches off the beaten track.

If you love an island holiday but want to experience Penang in the 70s – you can visit the local communities and villages.

These small islands or islets are the best Penang islands to explore remote jungle treks and beaches.

You will be surprised to learn that Penang’s islands have a long history.

Many times, you will need to get there by boat.

Here’s a list of the tiny islands you can visit from Penang: a heart-shaped artificial islet to the tiniest uninhabited islet, a car-free island, and those steep with a dark past.

Welcome to explore these 7 Amazing Islands Near Penang Pulau Gazumbo (sometimes written Pulau Kazambo) was created during the construction of the first Penang bridge in 1982.

Pulau Gazumbo is known as the Middle Bank, located between the Penang Bridge and the river mouth of Sungai Pinang.

Pulau Gazumbo is an artificial islet with the largest seagrass meadow in the Straits of Melaka.

Observed from an altitude of 120m, the islet has a heart shape.

The state government would be working to gazette the island as a sanctuary, called the “Middle Bank Marine Sanctuary,” an education and awareness hub.

Pulau Gazumbo, the man-made island next to the first Penang bridge, will be made a marine sanctuary by the state government.

What to do at Pulau Gazumbo?

Learn about the unique ecosystem of the seagrasses. The tiniest islet off Tanjung Bungah is the smallest on the list.

Translated as ‘Rat Island,’ Pulau Tikus was named because it looked like a rat during low tides.

It is uninhabited, although there is an abandoned building on the islet.

Large rocks form much of the coastline.

However, it is well isolated and suitable for loners who want to escape the maddening crowds.

Getting to Pulau Tikus

Pulau Tikus is close enough, so you can take a canoe or kayak there from Tanjung Bungah.

An excellent place to set off from the Penang Swimming Club.

Generally, it takes roughly 30 minutes to arrive at the outcrop. Pulau Rimau is an islet off the southern coast about 832 m from the southeastern tip of Penang Island.

An uninhabited islet, it is home to an active lighthouse built by the British in 1885.

The lighthouse is a 17 m (56 ft) round cylindrical cast-iron tower with a lantern and gallery.

A single-story house serves as a beacon for vessels entering the Penang Strait from the south. This tiny Pulau Kendi lies about a kilometer directly opposite Gertak Sanggul Beach.

The ruggedly handsome rocks may be one of your few reasons for visiting Pulau Kendi. Sunbathers will find the beach and sand too short and narrow.

The terrain is too steep for trekking, and the hills are too thick with rainforest.

On the boat ride, you can see White-bellied Sea Eagle and Brahminy Kite in the sky.

Pulau Kendi is one of the best for snorkeling in Penang, with beautiful corals and tropical fish to match the best island destinations in Thailand.

Unfortunately, the excessive number of day-trippers has spoiled the marine ecosystem.

Still, it’s an enjoyable offbeat trip to do when in southern Penang. Good snorkeling.

Cons: Not as pristine as it used to be.

Pros: Off the beaten track, the only place in Penang where you can go snorkeling is virtually free of people.

You get to enjoy the sounds of crashing waves and the call of birds without another soul in sight.

Getting to Pulau Kendi

To get there, head to Gertak Sanggul.

Then take a 6 min walk to Gertak Sanggul Beach and ask for a boat to take you to Pulau Kendi.

How to Get There: Rapid Penang Bus 308 from Sungai Nibong Bus station (read our guide to catching buses from Penang) stops at Gertak Sanggul beach.

From here, it’s about 200RM to charter a fishing boat for a maximum of 6 people and makes a 2 to 3-hour trip. Pulau Gedung is the twin islet of Pulau Aman.

It was once a pirate’s domain, a small islet thick with pristine jungle.

There’s Not much to do here, but explorers will enjoy the experience nonetheless.

Getting to Pulau Gedung
You can hire a boat from Pulau Aman or contact the Seberang Perai Fisherman Association. Penangites will point out Pulau Aman (Island of Peace), which you can spot from the first Penang bridge.

The small island between Penang’s Second Bridge and the mainland town of Tambun is only 300 acres (1.21 square km).

It is a habitable island with a small local fishing community (about 50 families and 300 inhabitants).

Despite its moniker as the Island of Peace, Pulau Aman was once a pirate’s lair.

There is a jetty to spot small “sampan” (fishing boats) and traditional Malay houses on stilts.

There is a tarred road but no cars on the island.

The islanders either walk or cycle to school or the local mosque.

The locals enjoy having goats and deer as pets, so you may find a few of these animals roaming around in the villages.

Recently, the villagers have turned some of their homes into Homestays.

The stars fill the sky magnificently at night due to the islet’s lack of city lights.

You can walk or bike around the island and visit the 1789 Telaga Emas (Golden Well) that never runs dry, even in the most severe drought.

Take a boat ride to the nearby twin islet, the beautiful and pristine Pulau Gedung.

Cons: Hard to get to Pulau Aman jetty without your car.

How to Get There: Drive to Bukit Tambun and follow the directions to Pulau Aman jetty.

You’ll be able to take a ferry from here to the islet.

There are several boat departures daily costing RM6 one way.

Travel Tip: Note that the ferry service (a speedboat) only starts operational at 10 AM. Tropical and lush with pristine rainforest, the island served as a former leper colony and jail.

Today, the island boasts an eco-resort and several watersport activities, with plans to turn it into Penang’s biggest eco-tourism destination.

For now, it is an impromptu little getaway for couples and groups out for a photo shoot and some relaxing activities.

Look out for the Instagarmable photo spots – a stairway to heaven, a rainbow pier, a romantic swing on the beach, and others.

The island is known for its breathtaking sunsets that will paint the sky pink, yellow, and orange!

Cons: expensive to get there and on the verge of development.

How to Get There: Pulau Jerejak is a short 10-minute ferry ride from Penang Island.

There are about ten ferry timings throughout the day, and tickets can be purchased from the ticket counter at Penang Island Jetty for only RM20 each. Exploring the Isle of Gedung 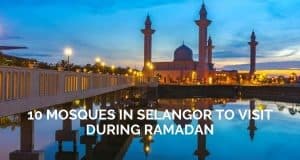