Tropical Islands in Malaysia By State

Here is the list of islands in Malaysia categorized

Borneo (shared with Indonesia and Brunei)

Other island groups, conservation areas, and national parks by State Tropical Islands in Malaysia By State

Islands on the West Coast of Peninsular Malaysia Islands on the South West Coast of Peninsular Malaysia

Johor lies at the southern end of the Malay Peninsula and is separated from Singapore Island by the Johor Strait.

Popular as a weekend getaway from Singapore, there are ten beautiful islands off the coast of Mersing.

Singaporeans can reach the island by driving to Mersing and a short ferry ride to the islands.

As popular destinations, the islands are great places for diving, snorkeling, and beach vacation.

Islands on the East Coast of Peninsular Malaysia

The east side has the best known islands: Pulau Tioman, Pulau Redang and Pulau Perhentian.

These islands are, in general, easy to reach and have the characterization of a beautiful place for peace.

Here you will experience the ultimate ‘tropical vibe.’

Borneo (Indonesian: Kalimantan) is the third-largest island in the world and the largest in Asia.

At the geographic center of Maritime Southeast Asia, about major Indonesian islands, it is located north of Java, west of Sulawesi, and east of Sumatra.

Malaysia Borneo is shared with Indonesia and Brunei.

The two largest islands located in Malaysia are Banggi Island in Sabah and Bruit Island in Sarawak.

The second-largest, the Sebatik Island in Sabah, is shared with Indonesia.

With stunning beaches, crystal blue sea, lapping waves, and abundant coral reefs make these islands in Sabah are an ideal paradise for a short gateway.

You will be spoilt for choice as there are nearly  400 islands in Sabah. Gaya Island derived its name from the Bajau word “Gayo” which means big.

These tiny islands serve as sanctuaries for Green and Hawksbill Turtles.

Islands of Federal Territory of Labuan

Federal Territory of Labuan is a small archipelago that includes Labuan Island and six smaller islands off the coast of Sabah in East Malaysia.

Malaysia has 878 islands, ranging from the inhabited, accessible to the lonely and remote – others smack of luxury and hit the high notes.

Luciano Pavarotti gave a private performance for just 250 guests on the Malaysian island of Pangkor Laut.

There is a Malaysian island for every budget tourist class.

Malaysia’s hundreds of islands are pretty, more accessible but less busy than those across the borders.

Malaysia’s islands offer more than just a relaxing holiday on a tropical beach or snorkel among beautiful coral.

You can choose to soak up the culture of colonial towns and breathe in the clean mountain air of the Malaysian rainforest.

Within a few hours from Kuala Lumpur, you can find inexpensive accommodations and a relaxed atmosphere, and the famous island destinations of Langkawi, Penang, and the Perhentian Islands on the East Coast.

From Penang’s street food, colonial architecture, and pristine rainforest to the Duty-Free Shops and luxurious pampering in Langkawi – you can choose from one island destination to another with ease.

You can have the two island holidays for the price of one: Perhentian Besar and Perhentian Kecil.

While the ‘Big Perhentian’ attracts families primarily, ‘Small Perhentian’ is popular among backpackers.

The islands have beautiful white sandy beaches and affordable hotels and guesthouses with a wonderfully relaxed atmosphere,

Travel Tips: Most places are closed during the monsoon season (October-March) The Perhentian Islands are islands in Besut District, Terengganu, Malaysia.

‘The Pearl of the Orient, Penang Island is best for nature and culture lovers.

The turtle-shaped island date back to 1786 has plenty of well conserved British-colonial architecture and heritage shophouses converted to cafes promoting strong coffee culture.

Stroll through the wet markets, visit the colourful temples, and eat the best banana leaf rice in Little India.

Take a trip in a cable car to the top of Penang Hill to enjoy the tropical rainforest or head to the smaller islands around Penang for the unspoiled beaches.

Search 100s of Top Hotels in Penang at the Best Price

Travel Tips: Plan your visit to coincide with George Town UNESCO Heritage Day for free access to all the temples and historical buildings in the inner city. Pampering At luxury hotels in Langkawi

For a bit of extravagance, exclusivity, and sophistication, the luxury sanctuary in Langkawi

are determined to outshine each other in the pampering stakes.

If you’re looking for privately-owned beaches and secluded coves, Langkawi’s five-star resorts offer some of the best accommodations.

Some have a complete program of activities and sports such as jungle trekking, caving, diving, snorkeling, jet-skiing, and parasailing. Langkawi is an archipelago of 99 islands in the Andaman Sea. 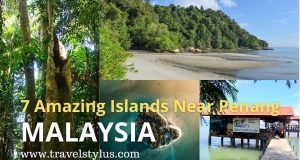