The entrance gateway to Lim Kongsi is via Ah Quee Street in George Town.

The Lim Clan house is open to anybody surnamed Lim, regardless of their origin and dialect.

In Penang, Lim is one of the two most common surnames. The other surname is Tan.

Kew Leong Tong, or ‘Hall of Nine Dragons’, is the primary association of the Lim clan in Penang.

The name Kew Leong Tong is said to commemorate the nine sons of a particular Lim clan in China elevated to the status of chief magistrates during the Tang Dynasty.

The ancestral temple belongs to the Lim clan association, one of the top five clans in Penang.

Dated back to the 1860s, the Lim Kongsi is the only Clan house in Penang with a female patron deity. The shrine inside the temple is Mar Chor Poh, the patron saint of seafarers, the patron deity of the Lim Kongsi. Photo: GTWHI

Why is the Chinese symbol a dragon?

Emperors were assumed to have descended from the dragons. That is why, out of the twelve zodiac signs, the Dragon is the most popular one. Close up of the dragons on the roof of Kew Leong Tong Lim Kongsi. Photo: Thuan Lin Goh

Their village of Koe Guan was in the sub-district of Sam Tor, district of Hai Teng, Cheang Chew prefecture.

The Lim Kongsi office started at a shophouse at 234 Beach Street, Penang.

The shophouse, donated by Kapitan China Chung Keng Kwee alias Ah Quee, was subsequently demolished to create the street that bears his name.

Ah, Queen Street runs beside 164 Beach Road, which is the longest shophouse in Penang.

They moved Lim Kongsi to its present location when the Lim Ancestral Temple building was completed in 1866.

Elder Lim Cheng Kah was the president of all three Lim Kongsi when the association operated from Messrs. Chop Heng Moh at 164 Beach Street.

In 1930, the three Lim Kongsi officially separated and had different management committees.

Whenever either of them holds an important function, they invite members of all three associations.

They hold annual festivals and celebrations at the Kew Leong Tong to this day.

What is a clan temple?

The clan temple is dedicated to the clan’s Patron Deities and houses a collection of ancestral tablets.
During the seventh lunar month, they stage Chinese operas at the theater.

The shrine inside the temple is Mar Chor Poh, the patron saint of seafarers, the patron deity of the Lim Kongsi.

Mar Chor Poh, likewise a Lim, is the patron saint of seafarers.

At the entrance to the Kongsi is an ancient shrine consecrated to Mar Chor.

What is a Chinese Clan house?

Kongsi is the official name given to the Clan house or meeting halls for overseas Chinese with the same family name.

Many Chinese people came to Penang in the early 19th century, and they were predominately single men with no other immediate family in Malaya.

What is the meaning of Kongsi?

However, the word has other meanings in different historical contexts.

This clan temple is an architectural beauty indeed, but they prohibit visitors from exploring its compound.

The ‘Hall of the Nine Dragons’ in Lebuh Ah Quee was built in the 1860s.

However, the Clan house has been renovated many times.

As you enter the Kew Leong Tong, you will find a well and the Mar Chor Poh’s shrine. There are three Lim Kongsi or Clan houses in Penang.

They established the three Lim Clan Associations in 1863, in the 2nd year of the reign of Emperor Tong Ti.

The Bian Soot Tong Lim Kongsi was confined to the descendants of two sub-groups of Koe Guan, namely the Keong Cheng and Eh Ho.

Whereas the Toon Pun Tong Lim Kongsi was open to all the families from Koe Guan.

We can still find the ancestral hall of both the Toon Pun Tong and Bian Soot Tong.

They are at the village of Ao Quan, in Hai Cang district, within the prefecture-level city of Xiamen.

As for Kew Leong Tong, it is open to all with the Lim family name or surname.

The Hokkien Clans in Penang

The Lim clan is one of the five major Hokkien clans in Penang.

The prominent five Hokkien families of the 19th century in Penang were the Tan, the Yeoh, the Lim, the Cheah, and the Khoo.

On their arrival from China to Penang, they quickly established trade ties in George Town and gradually gained wealth and influence.

Kew Leong Tong Lim Kongsi is one of the five trustees Kongsi of the Penang Chinese Recreation Club (The CRC).

Lim Kongsi is closed most of the time, but you can glimpse the exquisite clan temple from the gate.

If you are lucky that a caretaker is around, you may be allowed in with permission.

Lim Kongsi is not open to the public. If you wish to visit Lim Kongsi, be aware that at most times, Lim Kongsi is kept behind lock and key.

The best time for a visit is during the Chinese New Year Open House or Georgetown Heritage Day.

The regional public holiday in Penang falls on July 7th each year.

The day commemorates the anniversary of the recognition of George Town as a UNESCO World Heritage Site on this day in 2008.

On these two special occasions, the Kew Leong Tong Lim Kongsi temple is open to the public.

The celebration of the Winter Solstice Festival or Dongzhi varies from one Clansmen Temple to the other.

Traditionally, the Tung Chek Festival is a time for a family reunion.

One activity that most look forward to is the making and eating of tangyuan (湯圓).

Tangyuan is made of glutinous rice flour and is sometimes brightly colored.

Each family member receives at one large Tangyuan besides several small ones.

The rice flour balls may be plain or contain some fillings.

Cooked in a sweet soup or a savory broth, the ball and the soup/broth are served in a bowl.

Old traditions require people with the same surname or from the same clan to gather at their ancestral temples to worship on this day.

There is always a grand reunion dinner following the sacrificial ceremony.

The festive food of Tangyuan is a timely reminder that we are now a year older and should behave better in the coming year.

Even today, many Chinese around the world, especially the elderly, still insist that one is “a year older” right after the Tung Chek celebration instead of waiting for the Chinese New Year.

For the Kew Leong Tong Lim Kongsi, the Prayers Ceremony was simpler with raw pig and goat offerings made to the ancestors.

There is another simple act of offering tea and Chinese wine to the green grass in a flowerpot to signify growth and rejuvenation.

The entrance gateway of the Lim Kongsi is at Ah Quee Street, George Town. 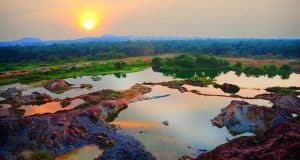 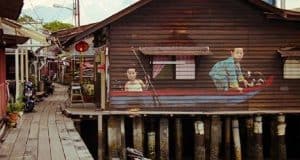